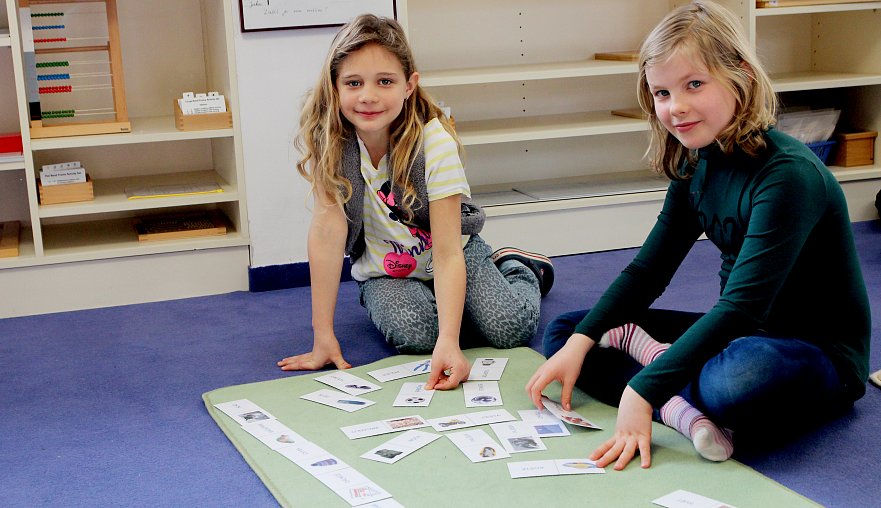 Duhovka Elementary School is a Czech-English school where children encounter both languages throughout the day. Their exposure to English is immediate and intense. We create a natural bilingual environment for children. We achieve this mainly through the presence of two teachers in the class - a Czech and a native English speaker.

In grades 1–5, children are guided by both teachers through the whole teaching day, each works with them individually, meets them, helps them and thinks with them. Both teachers work with them through the whole curriculum (except for language lessons of course, which are taught by the relevant teacher). Several teachers are involved in teaching at the Middle School, (the focus of individual subjects is more respected here). However, lessons are held in both languages and Czech and English teachers take turns teaching.

Children can communicate throughout the whole day with both the Czech and English teacher. They can ask them questions, make requests, share their experiences, talk to them, learn knowledge and skills or just listen to them.

The English teacher talks to children not only during lessons, of course, but also during snack time and lunches, on school trips and during events outside of the school as well as at School in Nature and on other occasions. By doing all this, English gradually becomes a natural part of their life, they get used to it as a means of communication, they listen to the sound of a foreign language and learn not to be afraid of it, learning words first then whole sentences.

Children learn to handle daily situations in a foreign language and use it as a means of communication in natural rather than artificially modeled situations. In addition, they not only acquire new language skills that they “might use some time in the future” but also those that they can employ immediately.

The children themselves help to create a bilingual environment at school. In addition to Czech-speaking children, children for whom English is the mother language attend the classes. In each class there are children of foreigners or children from bilingual families. Some children already have extensive experience from our kindergarten. All this is a basic precondition for English to sound as common as possible in each class. Children listen and learn from each other and the Montessori mixed-age model helps.

Knowledge of English is not a prerequisite for admission to Grade 1. Some children come with little or no experience with the language, yet they can gradually communicate during their first years at school. In order for each child's learning objectives to be set meaningfully, we have developed an English school curriculum in 3 levels, the first one concerns beginners and the third one native speakers.

Clubs and the after-school center in English

We are gradually developing a bilingual environment during afternoon leisure time activities. Thursdays are English Days, when our children are encouraged to communicate in English with each other as well as with the adults. At present, there are already several clubs in English. Some of the after-school center teachers communicate with the children in English.

For the children at Duhovka, communicating in English is part of their day. At the end of upper elementary (Grade 5) they speak, read and understand the language to at least the A2 level of the Common European Framework of Reference for Languages. Bilingual children achieve at least B2 level, but most of them place at C1 level in comparative tests.

At the end of Middle School (Grade 9), students can speak easily in English about everyday topics, make social and personal connections and learn to understand and respect other people's cultures and customs. In addition, they study some subjects in English. The usual number of students in a language group is 8-12. The total amount of English lessons is 20 hours per week. Compared to the Czech curriculum, the final level of the children is increased to at least B2 (intermediate) according to the Common European Framework of Reference for Languages, however, the vast majority of children and children from bilingual families speak English fluently, at a C1-C2 level.